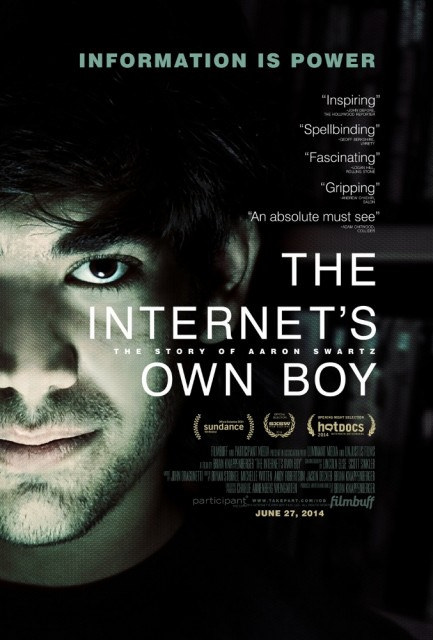 Before watching this documentary, I must admit that I did not know much about Aaron Swartz. I recognised the name and knew he was a legend in the history of the Internet/World-Wide-Web, but the movie opened my eyes to his achievements and influence. Considering all he had done for open access and internet freedoms, I am surprised it has taken me so long to recognise his legacy.

The movie is well produced and directed (by Brian Knappenberger), and was originally crowdsourced for financial contributions from those interested by Kickstarter.com. The storyline is well structured, starting from Aaron’s early childhood years through his adolescence and ultimately to his death at the age of 26 on January 11th 2013.

He was involved in many projects, and was the creator of several, of which his first (at the age of 12) was Info.org, a predecessor to Wikipedia. He was the main instigator of RSS (Really Simple Syndication) at the age of 14, and in the following years helped create MarkDown, Web.py, OpenLibrary.org, Reddit.com, and DeadDrop (later known as SecureDrop). He was also influential in the project Creative Commons – he believed that information should be available to all.

Many words can be used to describe Aaron Swartz – e.g. hacktivist, geek, programmer, entrepreneur, writer, social activist, and computer genius. He believed in social justice, that information equals power, and the system should be questioned. He stated that education and learning is ‘provisional – from there you have the power to change and question everything’. He was not motivated by money or fame. He wanted the laws on copyright to be less restrictive.

His political activism included the Progressive Change Campaign Committee, Demand Progress, and Watchdog.net. His mentor was Tim Berners-Lee, who shared his vision of an open and free internet. Aaron’s notable claim to fame was his objection to the CFAA (Computer Fraud and Abuse Act of 1986) and the SOPA (Stop Online Piracy Act of 2011/12).

In 2011 he hacked into the mainframe server at the MIT (Massachusetts Institute of Technology) and downloaded millions of scholarly journals from the JSTOR/Elsevier digital libraries, for the purpose of making these freely available to everyone. The publishers – not the authors – were (and still are) the ones who were making millions in profit from these articles.

However he was caught and prosecuted for this by the FBI (Federal Bureau of Investigation), and ultimately the United States Secret Service. He was indicted on several charges and was facing a $1 million fine, 35 years imprisonment and forfeiture of assets. Being an advocate of free speech had made him an enemy of the large multinational corporations.

Many in the movie say that this is why Aaron committed suicide by hanging – because he could not face being locked up. Some insist he was ‘murdered by the government’ including his own father. Several conspiracy theories have developed as to whether he was ‘suicided’ and it’s possible to go down a very deep rabbit-hole in any research. One speculation, for example, is why he did not leave a suicide note? Another is why did he choose that method of suicide when others would have been quicker and less painful? Many also believe that although he was depressed about the imminent prosecution, others do not think it would have led to him being suicidal. The true answer may never be known.

A movement ensued after his death by sympathisers and activists to update the CFAA to bring it in line with current copyright and open-source necessities.  A bill was introduced known as ‘Aaron’s Law’ but it was defeated, mainly by ‘vested interests’ of the internet behemoths.  Time will tell if another ‘Aaron’s Law’ could be successful, although this seems unlikely at present.

In conclusion, the movie/documentary was a real eye-opener for me. I did not realise his enormous contribution to the freedom of the internet.  Change-makers like him who challenge authority pay a high price eventually. His legacy lives on and many regard his work as revolutionary. He was posthumously added to the Internet Hall of Fame in 2013, and he is remembered each year by the Aaron Swartz Day and International Hackathon (this year being held in San Francisco between 9-11 November 2018).

I hope he is remembered for a long time to come.

Requiem for a Dream – The New Yorker ‘American Chronicles’

Debate.org – Is it possible Aaron Swartz was murdered?

Great Article, Paul. I agree that it was eye-opening to discover how much Aaron Swartz contributed to the freedom of the internet. In fact, one could say that he instigated the whole Open Source movement after all. His methods might not have been the right ones and I think he was very naive in the way he proceeded and in his visions. Nevertheless, he changed the internet and the way we perceive data and access to information with long-lasting effect.

A great read Paul. I like the detail at the end about how he is remembered with his own day (which is coming up very soon!) Also I think how you embedded ‘a few useful links’ is very useful.

Very detailed and concise in language Paul. All the inline links were useful as a means of navigating further afield. The end links were great as well, you managed to create a very useful research resource.

I agree with you Paul, I was so surprised l had never heard of him when he was so prominent in his field of work. You have to go looking for the information it is not on general info. I did a word search l put in opensource, hacktivist, democracy opensource and images nothing comes up. It’s like he didn’t exist.

Your layout for this informative piece of writing is well planned and easy to follow. The links at the end add more opportunities for people to explore the work of this young man. In total it is an informative piece for a webpage.

Hi Paul, I thought that your article was great. I went straight to Youtube to watch the documentary.

paulsproject.net uses cookies to improve your experience and assumes you're ok with this, but you can opt-out if you wish. Read More